Konecranes runway alignment survey is a workhorse technology that can help solve a whole herd of problems.

You may have heard the old saying: “No foot, no horse.” In the world of overhead lifting, you could amend that to: “No runway, no crane.” The condition of the runway influences how well a crane moves on its rails and affects the usability and lifetime of the crane and its travelling machineries. A runway in poor condition leads to reduced crane performance and reliability, and possibly to safety risks. To avoid this outcome, maintenance managers must have their rail surveyed to get an accurate picture of deficiencies, so that they can be corrected.

Konecranes RailQ Runway Survey is the safest, fastest and most accurate runway survey available. Roborail, our proprietary remote-controlled robot trolley assists with data collection so it’s not necessary for a human to walk the rails and take measurements manually.

After the data is gathered, Konecranes award-winning KC Trail software provides easy-to-read reports with 2D and 3D pictures of the crane’s runway alignment condition. It can generate a report and give a recommended correction (or even several correction options) at the press of a button. The RailQ Runway Survey is used around the world to solve rail issues on many different kinds of cranes.

The European Synchotron Radiation Facility (ESRF) in Grenoble is a joint research facility supported by 22 countries. Around 8,000 scientists visit this particle accelerator each year, conducting upwards of 2,000 experiments and producing around 1,800 scientific reports. The accelerator is 900 meters in circumference, serviced by three polar cranes that drive around its circular track on double rails.

In 2017, a planned major renovation of the facility called for replacement of all of the magnets in the accelerator, a multi-million-dollar project with a one-year construction timeline. But before ESRF could begin the update, they needed their trio of 6.3 ton cranes to be up and running at 100 percent capacity. Managers knew that the wheels on all the cranes were showing excessive wear, as was the runway itself. Even more ominous, the cranes didn’t track correctly and were frequently stuck. They needed specific data to know what repairs would fix the problem within their time frame.

Konecranes had just two weeks to survey the runway and produce a report. With the help of a team from Finland using RailQ, measurement data was collected, which showed the ESRF group how much out of tolerance their runway was. Since the track is circular, inside and outside wheel speeds are different and the diameter of the wheels is critical. The data quantified circularity, rate of change circularity, elevation, rate of change elevation, span, and rail-to-rail elevation. These measurements showed that only the span was within tolerances, causing the high rate of wheel, rail and flange wear and explaining why the cranes were unable to track properly. After reviewing the data produced by RailQ, the recommendation was to replace both the crane wheels and the runway to ensure 100 percent reliability for the larger renovation project.

TAKEAWAY: make the right decision to meet a hard deadline. 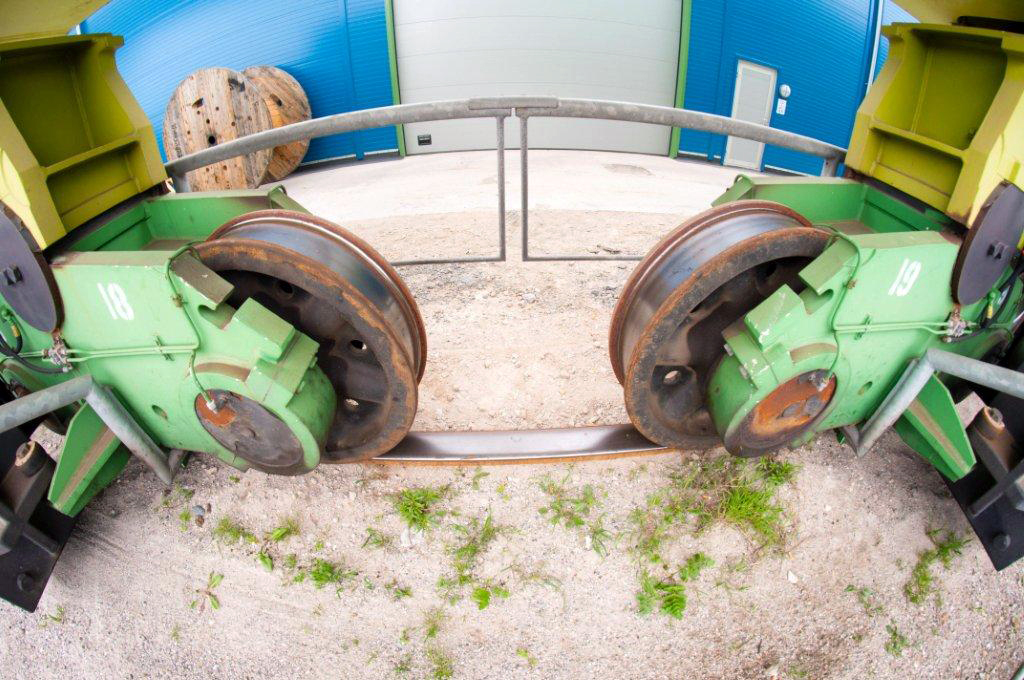 Goliath is the world’s largest class of cranes, originally designed to build ships. While the Lindø shipyard in Denmark built its last vessel in 2006, its massive 2004 Goliath crane, weighing nearly 5,000 tons, had a second act in its future. When the shipyard was repurposed to become Lindø Industrial Park, its 1000-ton Goliath crane was converted to build windmills. During this process, it was evident that many of the wheels on the crane showed severe flange wear. After three different companies were recruited to measure the Goliath’s 104 wheels without success, the crane owners contacted Konecranes.

More than one proprietary Konecranes technology was needed to diagnose the Goliath. RailQ surveyed the 1 kilometer-long runway, while CraneQ Crane Geometric Survey, a companion technology, was used to measure all 104 wheels. The CraneQ survey determined that the sequencing of the wheels was incorrect. As a result, Konecranes replaced 50 of the wheels with new ones engineered with different center offsets that would allow them to operate on the optimal line. Used together, RailQ and CraneQ had the ability to give the customer a more complete understanding of both rail and crane geometry, information that was needed to design an optimum solution. Four years later, the crane continues to operate with hardly any flange wear.

TAKEAWAY: get all the information needed for a successful renovation.

In Abu Dhabi, temperatures can easily range from 30°C in the morning (86° F) to 52°C in the afternoon (125°F.) This temperature range was a becoming a big problem for a fleet of rail mounted gantry (RMG) container cranes at Port Khalifa. The clamps holding the rail down kept breaking, creating unsafe operating conditions for the cranes.

Konecranes technicians used RailQ to measure the 340-meter runway in the early morning before the sun came up, and then measured the expansion of the runway in the afternoon when it got hot. They discovered a 50 mm difference in some areas between the early morning and afternoon measurements. They also noticed that the end of the runway was abutted with concrete buffers.

Konecranes recommendation was to trim the end of the runway, shortening the rail so that it could expand as needed as temperatures changed, relieving the pressure on the clamps. A small adjustment, but it made a big difference for this customer.

RailQ is also used for aesthetic and dynamic testing, to diagnose some very common issues for factory cranes. In this scenario, the runway is first measured when cranes are idle, and then measured again with the crane driving behind the robot carrying a full load. The data collected shows the difference between the unloaded and loaded situation of the runway.

In many cases, this test will reveal significant structural deflection of the pillar supports, as the columns sink to varying degrees when the crane is fully loaded. Konecranes recommendation in this situation is usually to rebuild the runway supports. But it’s important to know whether all, or only some of the supports are causing the problem.

TAKEAWAY: it’s vital to know exactly where repairs are needed.

Measuring is knowing. RailQ takes you beyond guesswork with a proven, accurate and reliable system to help you find answers and make decisions. When you need to go to a purchasing department and make a case for an expenditure that is critical to your business, it’s important to have all the facts.