The BEST way to assemble a new container crane

With so much activity in a big container terminal, it’s a major task to ensure that all container stacking is as efficient as possible. With the Konecranes Automated Rail-Mounted Gantry (ARMG) crane, you can plan every movement in advance so that you can be certain your container yard will be fast, safe and fully productive.

When new, automated ARMGs arrive on-site at a brownfield container terminal, they must be assembled, tested and commissioned while disturbing operation as little as possible.

No time for downtime

Founded as a Roman city, Barcelona has been a cultural, economic and administrative center for thousands of years. Today, the Port of Barcelona is Spain’s third and Europe’s ninth largest container port, playing a key role in national and regional trade, with easy access to intermodal connections by rail and road.

In 2008, leading international port operator Hutchison Ports requested tenders for automated container cranes at a new terminal planned for the Port of Barcelona. They wanted high-end tech for a thoroughly modern port, and decided that Konecranes offered the best semi-automated solution for their needs.

At the time, the Konecranes ARMG was still a relatively new product, but its advantages were already proven by its five years on the market. Built on the same reliability and durability well-established through the Konecranes Rubber-Tired Gantry (RTG) crane, the ARMG uses similar lifting and hoisting technology combined with a light steel structure to streamline the movement of its gantry, and utilizes Active Load Control (ALC) for fast and accurate container stacking. Fully electric, it has a lifting height of 18 meters, a portal width of 29 meters, and with a telescopic spreader, can lift a maximum load of 40 tons. 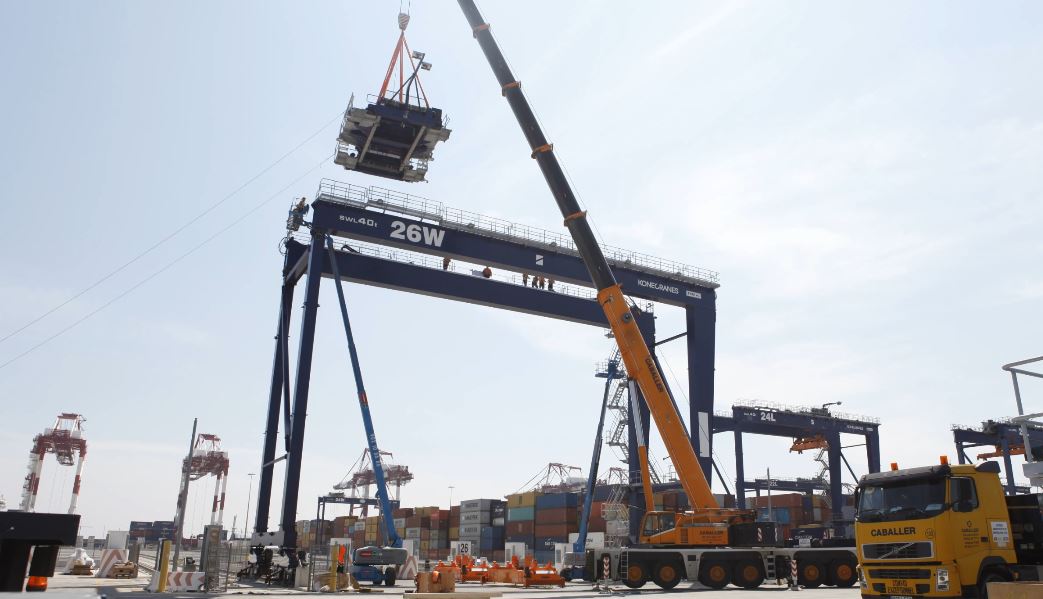 It can take months to assemble, test and commission a new crane on-site. Even when working on several cranes simultaneously, such a large order takes considerable time. The first  cranes were ready four months after arrival, as planned.  They were on schedule and on budget.

The semi-automated Barcelona Europe South Terminal (BEST) was officially inaugurated on September 27, 2012. Raising the level of technology, quality of service and volume of throughput, the new terminal performed even better than expected. Success soon led to a need for more capacity, and BEST ordered 12 more ARMGs from Konecranes for delivery in 2015. In the beginning, it was easy to assemble and test the cranes as each new block was put into operation, but this time, with tight customer schedules stretching available limits, it was necessary to assemble and commission the new cranes within the flow of the terminal’s operations. This was a much more difficult proposition.

What could Konecranes do?

Konecranes found a way to assemble, erect and test 12 cranes in a working terminal with zero downtime.

They had to cooperate very closely with BEST because placement of the new machines required coordination with the yard to ensure they did not interfere with any ongoing processes or put any people in danger.

The yard was arranged by ARMG blocks that were 50 TEU long and 9 TEU wide, with 5+1 TEU height and two ARMGs per block. In a semi-automated space, the cranes were controlled by an average of 10 remote operators per shift at a remote operating station (ROS) in an office at the side of the yard. All of the operators, whether they operated ARMGs or other equipment, needed to know about the extra activities going on in the yard so that they could monitor the situation and take action as necessary.

The cranes were delivered by container block, with two cranes per block, in the pairs in which they would operate in the yard. They were unloaded next to available rails. BEST had carefully maintained the rails of their already operating ARMGs, and they had the new rails ready when the new cranes arrived. The new ARMGs were assembled directly onto the rails. The new cranes were connected to the yard’s existing remote monitoring system and as they were started up, the operators in the ROS could test them immediately without interfering with the activities of the other cranes operating in the area.

Because BEST is a semi-automated container yard, personnel are rarely close to operating cranes, but some technical specialists are needed on the ground when assembling and testing a new crane. Automated processes help make the area safer, since the actions of all cranes can be predicted and directed ahead of time and coordinated with human movement so the exposure of personnel to the physical dangers that a busy yard can present are minimized.

The solution worked so well that Konecranes and BEST used it a second time to install six more ARMGs to expand capacity even further in 2019. BEST now has 27 automated blocks across the yard: 54 Konecranes ARMGs in total.

Predictability is also useful for making technical adjustments. Nothing lasts forever, but an ARMG certainly lasts longer with regular maintenance, and with 54 ARMGs, BEST does maintenance on at least one crane every day. It’s unusual for a well-maintained crane to break down unexpectedly, but if it does, it needs to be fixed quickly. There is a maintenance position for every ARMG at the end of its own block, so the ARMG block can continue serving both landside and waterside operations with one ARMG. Semi-automation allows planned movements to be allocated to the second crane on the block so that BEST can stick to their customer timetables with almost no delays.

“We now enjoy a ship productivity rate of more than 200 movements per hour and an average of more than 40 movements per hour by crane, one of the highest in the world,” says Vinces Roig, COO of Hutchison Ports – BEST. “We consider it a reference terminal, modeling it in other ports in the Hutchison network. This would not be possible without the close cooperation we have had with Konecranes.”

Jussi Sarpio, Director, Auto Yard Cranes at Konecranes, agrees. “A good customer relationship makes all the difference,” he says. “Automation is still relatively new, and new things require a lot of trust. The ARMG in particular has highlighted the benefits of working together and believing in each other.”