Intermodal freight travels in shipping containers that move between different modes of transport – road, rail, river, sea and even air – without any unpacking. With 95% of manufactured goods around the world traveling by container, intermodal is becoming more and more popular with terminal operators and carriers, as it offers plenty of business advantages that a single mode does not.

The global logistical chains that we enjoy today would be impossible without containerization and cargo ships. When the ships dock at seaports, they are unloaded and the containers are taken inland by road, rail or river. The mode of transport changes at transshipment hubs, where containers might be transferred from river barge to train, for example, or from train to truck. These hubs are known as “intermodal” terminals. Intermodal is growing in importance as more cargo travels in containers, with ever tighter time and cost constraints.

This article outlines the basic idea of intermodal: what it is, how it works and its overall benefits. A second article will examine the practice of intermodal, as it explains how to start and develop your own intermodal hub.

What are intermodal containers? 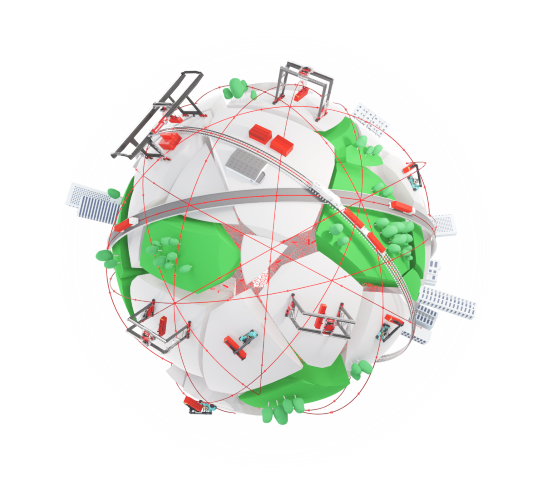 Around the world, the most common method to transport goods is in standard ISO shipping containers. The 20-foot (6.1m) ISO container has become the standard measurement for container volume as the twenty-foot equivalent unit (TEU), although the 40-foot container (2 TEU) is the most widely used. Each standard ISO container has a corrugated steel roof and walls and a wooden floor with steel cross-member supports, and includes twistlocks, corner castings with openings for the twistlocks from other containers or shipping anchors, cargo doors at one end, and a CSC plate to show it has passed structural inspection.

Goods can also be transported inland in other types of containers, including swap-bodies (light containers with legs), trailers for trucks and semi-trailers, and non-standard containers (longer than standard).

The basic principle of intermodal is that cargo stays in the same container as it moves between forms of transportation from its point of departure to its destination.

What kinds of products can be transported through intermodal terminals? Anything that would normally be safe to ship in a container. Special containers with thermal properties, insulation, refrigeration (reefers), heating, tanks and so on can also travel through intermodal terminals if the terminals are able to handle them. Shipping regulations vary between countries and regions, but generally they prohibit the transport of anything that is flammable and toxic, plants and animals, or weapons and ammunition.

What is an intermodal hub?

The reach of intermodal can be thought of as a supply chain comprising three phases of rail and road transport:

Pre-carriage and post-carriage transport occur most often by road or short line rail. For especially long trips, main carriage transport might change mode somewhere during the journey – for example, a container could travel by rail to a seaport, go by ship to another country, and be taken by road to an inland destination without rail access. Transfer between modes is often necessary. This is where intermodal comes in.

An intermodal terminal or hub is a facility able to move containers between different modes of transport, with storage space for containers waiting for the next leg of the journey. It is usually situated inland at a location that offers access to major road, rail and sometimes waterway transit routes. It will sometimes be at, or close to, a seaport with substantial rail connections.

The intermodal terminal has a carefully designed infrastructure and specialist container handling equipment that varies according to the container types handled and the container handling volume. If the terminal has a low-to-medium container throughput, reach stackers should be enough. As volume increases, Rubber-Tired Gantry (RTG) cranes or Rail-Mounted Gantry (RMG) cranes offer an efficient way to handle large numbers of containers between road and rail.

What are the benefits of intermodal?

Intermodal has grown to become an important part of the logistical chain because it offers many economic and ecological advantages:

•    Inland transport solved: intermodal provides the flexibility needed to ship containers inland by selecting the best mix of road, rail and waterway transport.
•    Standardization: intermodal maximizes the transport value of standardized containers by making it possible to standardize the equipment that moves the containers, so the whole logistical chain is simpler and easier to manage.
•    Faster: no unpacking speeds up the process of moving a container from one mode of transport to the next, and less reliance on road transport reduces problems caused by traffic congestion and road surface conditions.
•    Safer: high-volume container traffic is often on rail and water, which greatly reduces the risk of traffic accidents.
•    Security: the risk of damage, loss or theft is much lower as the cargo is always locked inside the container, and is not repeatedly packed and unpacked.
•    Smaller carbon footprint: rail is one of the most environmentally friendly forms of transport.

The value of the worldwide intermodal market is difficult to quantify but a good estimate would be that it’s already worth some US$51 billion annually and it is projected to reach nearly $70 billion by 2027.

How to start using intermodal solutions

As more companies build their futures with intermodal operations, Konecranes can provide the intermodal terminal infrastructure that will help these ventures succeed – from intermodal container handling equipment to complete terminal design, operating systems, automation and maintenance.

The next article looks at the practical considerations involved in designing an intermodal terminal, whether the goal is to build a greenfield site or expand a brownfield terminal.