At their two terminals in Burgas, a port city on the coast of the Black Sea in southeast Bulgaria, BMF Port Burgas EAD (BMF) have had four Konecranes Gottwald Model 6 Mobile Harbor Cranes retrofitted with cable reels for an external power supply to increase flexibility and sustainability while reducing costs and maintenance. 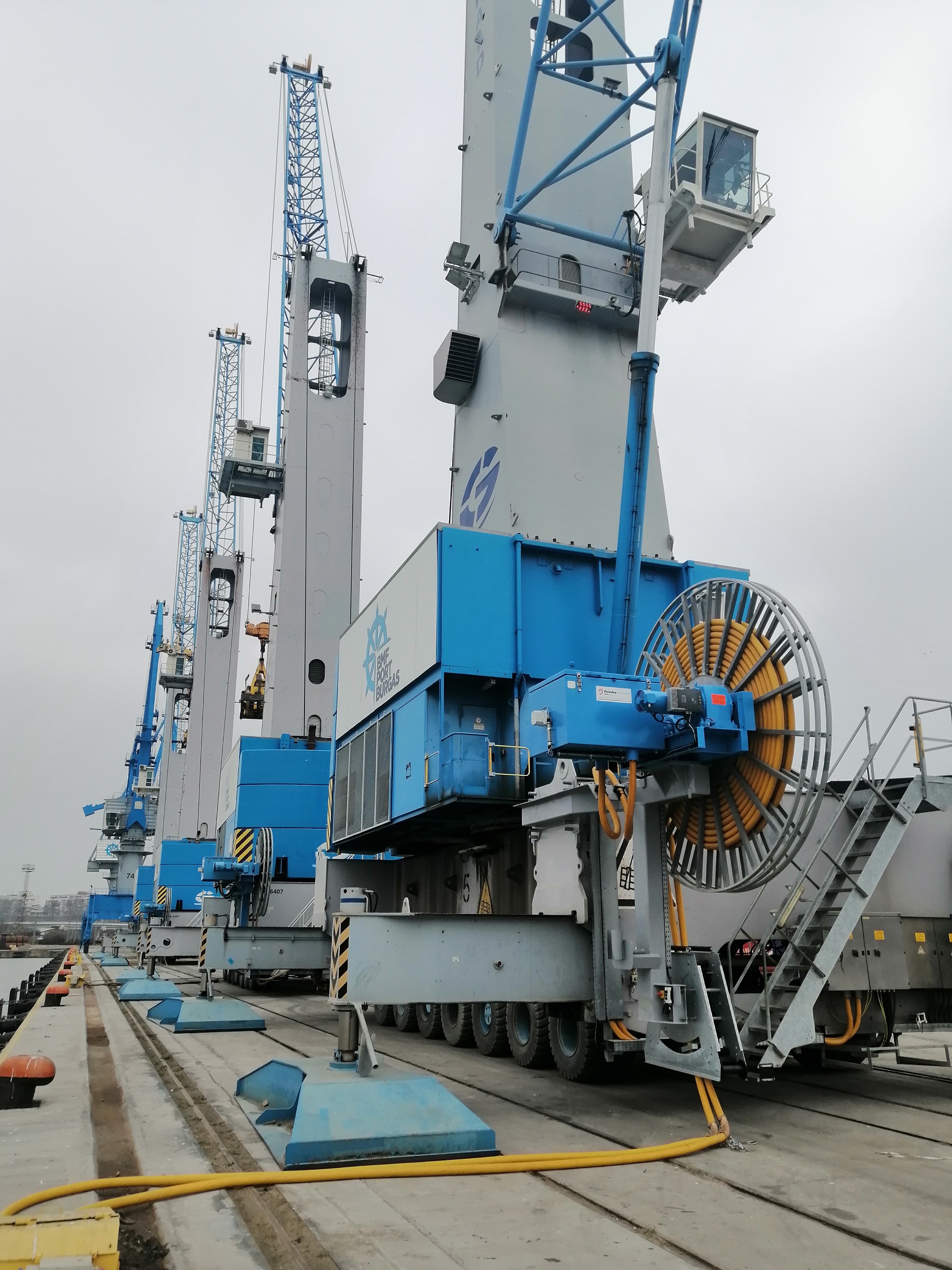 BMF is the biggest private port operator in Bulgaria. It has a concession contract for Port Terminal Burgas East II and Port Terminal Burgas West, which are located on opposite sides of the main Burgas quay. Part of the national public Port Burgas, the facilities and equipment in both terminals allow for the handling of all kinds of cargo, including bulk, liquid, general, project, Ro-Ro and containers. In 2016, they had two of their four Model 6 mobile harbor cranes retrofitted for an external power supply. After seeing how effective the retrofits were, they decided to retrofit their other two Model 6 cranes in 2021 in the same way.

The four retrofitted cranes are Konecranes Gottwald Model 6 Mobile Harbor Cranes in the G HMK 6407 variant. They have a maximum lifting capacity of 100 tons, and a working radius of 51 meters, with the outreach needed for container ships up to post-Panamax and Capesize Bulker class.

In their power retrofits, each of the cranes received a cable reel for a 400-volt external power supply, with two supply cables wound onto one cable drum. The cables allow the crane to move 50 meters in either direction from the power feeding point, for a total possible travel distance of 100 meters. As a turnkey project limited to only two cranes each of the two times it was run, it was possible to minimize the effects of the retrofit project on cargo handling, with only about three weeks’ downtime per crane.

The goal with every retrofit is to make the handling, functionality and reliability of existing cranes equivalent to the latest generation of Konecranes equipment. A retrofit makes the most of the strength and durability of the overall structure of the crane while adding technology that was not part the original delivery, improving operational efficiency and making the crane almost like new.

“We were very impressed with the effectiveness of the first retrofit project,” says Nikola Chomakov, Operations Manager of BMF's Container Terminal. “The two Model 6 cranes showed measurable increases in productivity and sustainability, while at the same time, a clear drop in operating costs. With such a quick return on investment, we decided to retrofit our other two Model 6 cranes as well. It’s clear that the extra advantages that electrification brings are well worth the expense.”

All four cranes play a critical role in quay operations as they load and unload calling vessels. Cable reels offer easy movement so that the cranes are able to work together to access the full length of big modern container ships that can sometimes extend along the whole quayside. And they provide flexibility of operation, as they are actually hybrid machines, retaining their diesel engines as emergency backup power in case the mains power grid cuts out during operations, or if they need to be used out of range of the power cables. Because the diesel engine is used less, overall maintenance costs and downtime are reduced. With electricity as the principal power source, there are no exhaust emissions if the diesel engine is not used, and less noise in the port and its vicinity.

“The success of these retrofits highlights Konecranes’ knowledge and expertise in the productivity and sustainability of ports equipment,” says Volker Struck, Technical Service Sales Manager, Konecranes Port Services. “When their key harbor cranes all maintain the same high standards, BMF demonstrates their commitment to Port Burgas and the customers who use their facilities, and Konecranes is proud to help them to achieve this goal.”

These retrofits are a good example of Ecolifting™, Konecranes’ vision to maximize benefit and minimize environmental impact with our products and services. Retrofits can be a cost-effective way to improve performance while reducing the carbon footprint of both equipment production and operation.”