Cranes have evolved significantly over the last few decades. While some operations soldier on with the same lifting equipment they’ve used for years, others surge ahead, taking advantage of current technology offered on newer cranes.

Fortunately, you don’t have to buy a new crane in order to benefit from some of today’s most popular bells and whistles. We’re going to look at two simple, cost-effective retrofits that can make your existing crane safer, more productive and less expensive to operate–even if it is decades old.

Upgrade to LED Lighting to increase safety, save on energy costs

The LED Lighting Upgrade is one of the fastest, least-expensive ways to make your crane safer, while enabling you to save up to 80 percent on energy costs.

Industrial cranes are usually equipped with lighting because ceiling-mounted lights are inadequate–frequently blocked by the crane itself. Standard crane lighting packages with incandescent, high pressure sodium or metal halide fixtures help, but since the light they emit spreads widely, it is common that an operator driving the crane from the side will be looking directly into the light, significantly reducing his or her ability to see the load.

LED lighting fixtures work differently. Their ability to shape light and focus it downward on the task at hand greatly reduces the blinding hazard, making it much easier for operators to keep their eyes on the load and avoid obstacles. Also, LED lights don’t require an extended time period (up to 20 minutes) to cool down before restarting like traditional types of lighting. You can turn them off and on as needed. When you replace existing lighting with LED fixtures on a standard 10-ton industrial crane, it is not unusual to save as much as 80 percent on power consumption for that crane. Typically, the largest motor is on the hoist, and the crane is not driven constantly, so most of the energy is consumed by the lighting. Larger cranes can still expect to save as much as 40-50 percent on the energy bill for the entire crane.

Other benefits: LED lights illuminate instantly and don’t need to be changed as often as traditional lighting. The current generation of LED lights lose only about one percent of their illumination capability in a one-year period, so the normal change period can be as long as 10 years. In comparison, standard lighting is more likely to break down due to vibration and normal use, and is likely to be changed every two to four years.

Retrofitting a crane with LED lighting is fairly simple. If the crane already has lighting, usually all that’s needed is to change out the light elements and switches. Because LEDs use so much less energy, existing transformers are normally adequate. If the crane does not currently have lighting, Konecranes offers a package that includes the transformers, relays and all the necessary parts, along with installation instructions. Either way, the operation normally takes less than a day. If you don’t want to do this yourself, a Konecranes technician can help.

Change to radio controls to transform your crane and your workflow 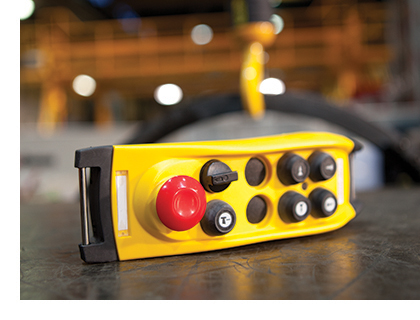 How many of us still get up to change the channel on the television? Not many. We use a convenient remote control from the comfort of the couch or easy chair. And yet, tens of thousands of cranes worldwide are still using pendant controls. The operator has to leave the pendant location to rig the load, and then walk back to the pendant to move the load–countless times each day. How much time could your operator save with a radio control that is within reach at all times? Even more important, a radio control lets the operator choose the safest place to walk with the crane that offers the best visibility, not limited by the length of the pendant cable or where it moves.

Operators can make choices that are faster, better and safer, and drive the crane from the optimum position. In some cases, a radio control may make it possible for certain jobs to be done by one operator alone, rather than an operator and a rigger. In manufacturing facilities with a very long crane usage area, sometimes 100 meters or more, the benefit offered by a radio control is even more pronounced.

Most standard cranes can be retrofitted with a radio control in a day or less. Konecranes CXT cranes use the same plug for the radio receiver and the pendant, so an upgrade to a proven original factory solution is very simple. Konecranes can retrofit radios for other crane manufacturers as well, offering standard, heavy duty and fine operation upgrades for most one- and two-hoist cranes.

Each manager knows his or her own operation best. My recommendation is to visualize how these two upgrades could impact efficiency in your workflow. It’s safe to say that if you aren’t yet using LED lighting or remote controls on your cranes, you are missing out on significant energy savings, safety benefits and productivity improvements.