Automated cranes work around the clock to keep the lights on

Founded in 1998, Fortum is a Finnish energy company running power plants throughout Poland and Russia. Besides generating electricity and heat, it also provides a variety of other energy-related services and products. With operations that include hydroelectric and waste-to-energy, the company has a particular focus on sustainable solutions.

Klaipeda, the third largest city in Lithuania, has one of the few ice-free ports in northern Europe, making it key to transport and trade in the region. The city chose Fortum to build a new power plant to help manage waste and provide energy. A combined heat and power (CHP) facility would process CO2-neutral biomass mixed with municipal and industrial waste for fuel.

The plant needed cranes to shift the trucked-in waste from its vast storage bunker into the adjoining incinerator. Key to the operation of the plant, the cranes had to work around the clock, seven days a week. If they stopped for any significant amount of time, fuel wouldn’t get to the boiler, shutting down the turbines that produced the plant’s output of essential heat and electricity.

Konecranes was involved in the construction of the power plant from the early planning stages -- two grab cranes working together were enough to cover the whole area of the enormous waste bunker. The crane controls were fully automated and equipped with remote monitoring technology.

Inaugurated by the Lithuanian and Finnish presidents in 2013, the plant produces about 140 GWh of electricity for the Lithuanian grid and 400 GWh of heat – a full 40 percent of the district heating for Klaipeda – per year. Using so much waste for fuel has significantly reduced landfill, and CO2 emissions have dropped by 96,000 tons annually.

Klaudijus Zilinskas, Fortum’s operations manager, has been very pleased with the fast and efficient after-sales support from Konecranes. With remote monitoring, Konecranes technicians rarely need to be on site at Fortum Klaipeda except for scheduled service calls and preventive maintenance. The two Konecranes automatic grab cranes have proven their ability to handle their grueling, non-stop work schedule in the huge waste bunker. 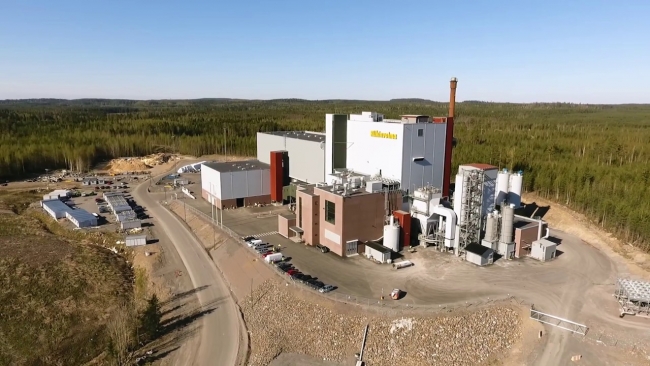